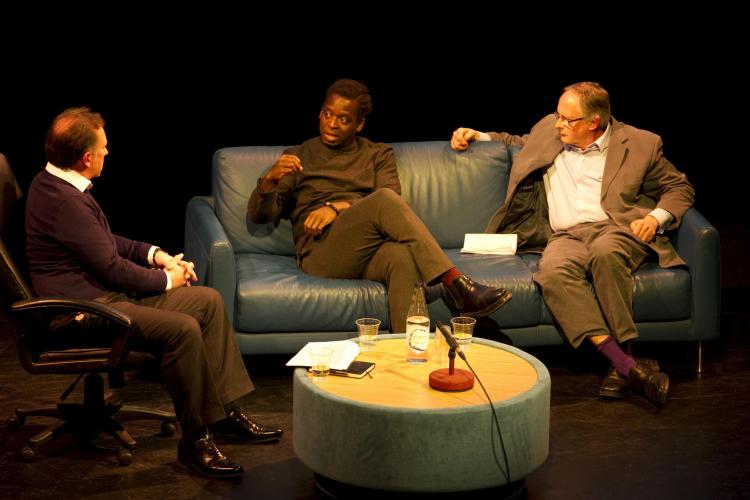 An enthusiastic and receptive audience packed the Ivy Arts Centre last night for Change through the Arts Careers. The evening was hosted by Head of GSA, Sean McNamara who interviewed guests Theatrical Producer Ashley Herman and respected actor and GSA alumni Kobna Holdbrook-Smith.

The Question and Answer style interview was followed by an informal open forum to the audience who enthusiastically joined in discussions.

Both guests stayed afterwards to mingle with students offering advice on careers in the theatre industry and exchanging ideas.

Ashley Herman began his career in the theatre at the age of 17. He has since produced or co-produced over 35 West End shows, included Les Miserables, the Phantom of the Opera, Miss Saigon and An Inspector Calls directed by Stephen Daldry. In 1981, he founded Applause, the UK's first travel trade dedicated ticket retailer that grew into one of Europe's largest independent agencies. In 1989, on behalf of producer Cameron Mackintosh, Ashley launched Theatre Direct International in New York. TDI grew rapidly and is now known as Broadway.com. In 1997, Ashley sold Applause and in 2000, together with his colleague John Wales, founded the Encore Tickets Group, which is now the leading independent theatre ticket distribution company in the UK. Ashley continues to be actively involved in theatre investment and production and is Chairman of the GSA Advisory Board and is a former Member of Council for the University of Surrey. He also serves on the Board of the Lyric Theatre Hammersmith and is the recipient of the Queen's Award for 'Outstanding Community Service'.